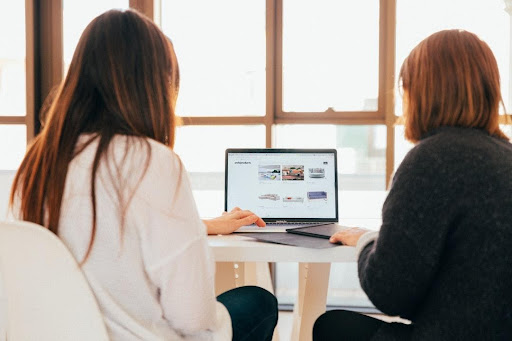 The rise of the open education movement

The open education movement has staked its claim to a growing corner of academia over the last two decades. It’s become a central theme in conversations about pedagogy and equity worldwide. The recent pandemic brought a fresh surge of interest in open education. The crisis highlighted the importance of equal access to resources — and the prevalence of barriers to that access.

But what is the open education movement? And what do students and educators stand to gain or to lose by it?

What is the open education movement (OEM)?

The open education movement (OEM) is the growing trend of open education philosophy — a belief that educational resources and experiences should be available to everyone. Since both depend on the internet, it has walked hand-in-hand with the development of digital learning, with considerable overlap between the two.

In 2001, MIT announced its OpenCourseWare (OCW) project, which would make MIT courses and materials freely available online. At the same time, the OpenStax project set out to create a similar educational database. Both showcased the very next year at the launch of Creative Commons, which released the licenses under which the material was published.

Ever since, there has been furious debate over the best way to develop and oversee open educational resources at all levels of education.

What are open educational resources (OERs)?

Open educational resources (OERs) are learning materials to which creators have waived some or all of the associated copyright — often by releasing these resources under Creative Commons licenses or something similar.

The creators of OERs permit others to access, reuse, and modify their work at will. In addition to simply making high quality materials available, they allow unprecedented collaboration. Teachers can modify materials to better suit their courses and their students.

The impact of the OEM and OERs can be felt from elementary education on. While initially focused on higher-level education, more and more schools are discovering the benefit of using open resources to reduce costs and supplement student learning.

As the popularity of the OEM has surged, commercial publishers have become involved as well. They often develop these materials in conjunction with the textbooks they sell.

In response, a debate over responsible OER production and stewardship has emerged. In 2018, top executives in OER development published the CARE framework as a guide to ethical use and creation. The four best practices they recommend are:

The response of publishers and OER executives to the CARE framework has been largely positive. However, some concerns have been raised over whether its terms might intimidate new and unsure educators away from OER.

And all agree the conversation is by no means over.

Why are colleges embracing OEM and OER?

One of the biggest reasons behind the increasing push towards OEM and OER in colleges is financial — the high cost of textbooks, which contributes to student debt. Between 2006 and 2016, the average price of textbooks increased 88%. That’s even more than the increase in tuition at 63%.

The high cost of textbooks can be prohibitive for students from low-income backgrounds. Studies have shown that many students don’t even purchase all of their required texts for a given year, despite the negative effects on their grades.

In response, some institutions have developed courses and even degrees that do away with textbooks altogether. Instead, these programs rely on OERs.

The nonprofit Achieving the Dream launched the Open Educational Resources Degree Initiative in 2016, a study of 38 two-year colleges now offering fully OER degrees. In addition to saving students more than $10.5 million dollars, the study revealed a startling correlation between OERs and student success.

Students that took OER classes received more credits. They were substantially less likely to withdraw from courses, and they performed as well or a little better in courses than their counterparts in traditional textbook classes.

Achieving the Dream hopes to follow up on its success with a new initiative focused on OER and innovative teaching practices.

The biggest example — quite literally — of open education courses is the creation of MOOCs, or massive open online courses. These huge courses can be taken by anyone for free or at a very low cost and can enroll a virtually unlimited number of participants.

What are the benefits for schools and students in relation to OEM and OER?

Schools and students alike receive many benefits from OER adoption. While not exhaustive, the list below is a good place to start.

You’ve already read about the much lower cost of OER for students who find rising textbook costs burdensome.

Ease of improving, editing, and circulating

OERs are dynamic resources. They’re meant to be continually improved through collaboration and as required by changes in the field. You don’t have to wait until the next edition of the textbook comes out to see changes.

Teachers can also modify them locally, adapting resources to better suit the needs of their particular students. For example, they may change certain language or add/subtract sections.

Circulation is also easy and almost instantaneous. There’s never any backorder that can trip up a student at the beginning of the course.

As several schools have demonstrated, you can use OERs exclusively, but you don’t have to. They work well on their own and as supplements to traditional textbooks. You can also mix up different OERs until you find the combination of course materials you need.

Whether ten or ten thousand need to access a resource, there should never be any difficulty in adding new users. There’s also no problem with small-scale publication for niche texts.

Much of education happens through social learning. You don’t learn information or skills in a vacuum. Instead, you ground them in problems and interactions.

Open education enables social learning on a previously unthinkable scale. It teaches students to be participants in the production of knowledge and makes the process behind content visible. Students can discuss and interrogate material, helping them achieve deeper knowledge about it.

What are the cons for schools and students in relation to OEM/OER?

Questions about quality and sustainability

While continual improvement is the goal for OERs, there are two major obstacles. The openness of OERs also removes them from a mandated peer-review process.

On one hand, this makes them more available to new voices from more diverse communities. On the other hand, it can lead to uneven quality and a lot of untested resources.

There’s also a potential problem of sustainability. Again, the goal of OERs is continual improvement and constant updates. However, the fact that creators aren’t paid for their work removes some incentive. Educators do need to earn a living, and they may need to prioritize paid projects over OERs.

While the guiding principle behind the open education movement is educational equity, that very principle is threatened by the digital divide. One of the biggest challenges that online courses faced during the pandemic was the fact that many students — particularly in low-income and rural areas — struggled to get to class due to difficulty accessing the internet.

The disparities in internet connections and hardware compromise the effectiveness of OER adoption.

While the online courses and collections may be open access, they sometimes use materials that are not. It’s difficult to police the vast library of OER in order to ensure that all content is both ethically and legally acquired.

While OERs and open education degrees help defray costs for students, they aren’t free to develop. Creators need to donate time, and at the institutional level, OERs create the need for new infrastructure and, sometimes, people to manage it.

It currently costs around $575,000 to launch OER-based courses and programs. That cost may make it more difficult for schools in low-income areas — schools where students might particularly benefit from OERs.

People are guilty everywhere of doing things in a certain way because they always have. While OERs work particularly well with online courses, many professors were slow to adopt them during the pandemic. Unfamiliar with the possibilities, they continued to rely on course materials less suited to online deployment.

How can you get started with OER?

A trusted online course provider can help you vet OERs and integrate them with other online materials. Through this and other free articles with valuable information for college educators, Caduceus also hopes to contribute to the library at your fingertips. After all, “contribute” puts the “C” in CARE.

Are you an educator looking for turn-key curriculum solutions for your health science course?

Get a free demo 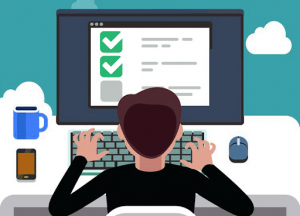 How Does a Proctored Exam Work?

What Is Proctoring? Proctoring during examinations is, simply put, the process of

The Best of Both Worlds: Active vs. Passive Learning

Full-classroom engagement is hard. You need to account for different strengths and 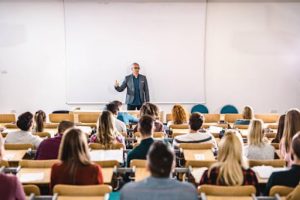 Active Learning in the College Classroom